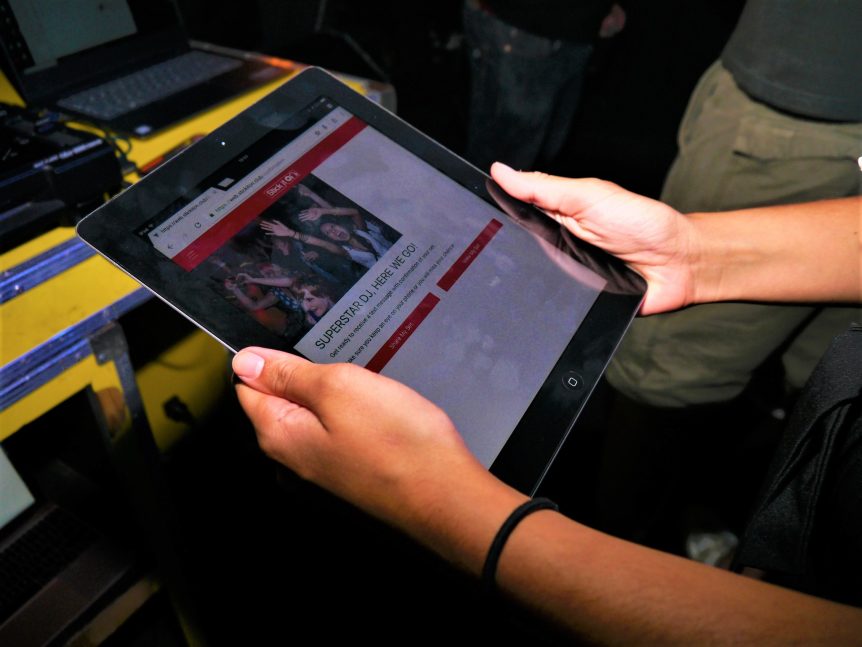 On a Thursday night, some few hundred delegates accended into Concorde 2 for the BrightonSEO pre-party and Stick It On was there to guide them through their DJ superstardom. Don’t want to go it alone? Find a buddy and form a team!

BrightonSEO is a bi-yearly meet up with industry types over a 3 day period. Originally an idea born in a pub this quickly expanded and now hosts up to 3,500 delegates on Brighton seafront.

When we were approached by DeepCrawl to provide the entertainment we couldn’t have thought of a better place to use our Stick It On app we’ve been working on. An easy to follow web-based app which allows guests to sign up on the spot to have their 15 minutes of fame behind the decks. Staff signing up Stick It On DJs

A team of staff, armed with iPads were on hand to get people on board guiding them through the easy progress. As BrightonSEO is a tech-based event it only seemed fitting to incorporate that into the evening itself.

After a short while, we had our first 10 DJs signed up and ready to grace the stage of Concorde 2, not an easy feat in such a large venue but with the drinks flowing and the music pumping the guests were ready to let their down hair.

As Stick It On is such an interactive experience once the idea had caught on, everyone wanted their turn resulting in back to back DJ sets from 8 pm until midnight with the excitement of seeing your friends behind the decks it made sure to keep the dancefloor occupied from start to finish.

We received some great feedback from both the event manager and the venue staff and were really pleased to play a part of such a successful evening and we hope Stick It On can cater for future BrightonSEO events.

Click on the image below for a preview of the app!

If you think that Stick It On would work for your next party get in touch with us to book in a chat. Signing up to DJ through the app The crowd appreciating a good Choon!

Click here to view more photos from the night.