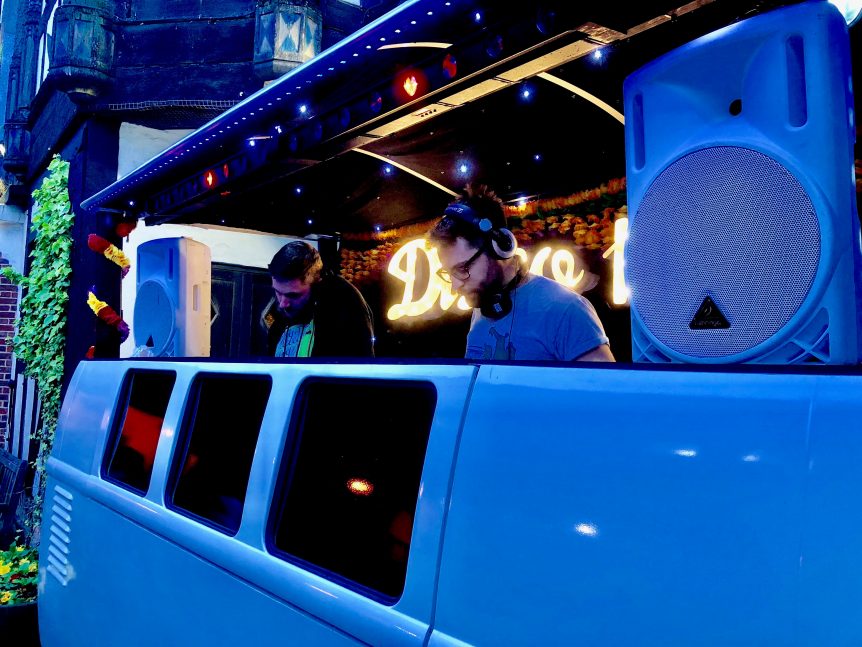 It’s a balmy Thursday night, students alongside football fans are out drinking in full force at Ye Olde King and Queen and in the courtyard is our first pop up Silent Disco coming from a kitted out converted VW, aka the Disco Bug.

For a first run it was a success, having to compete with Arsenal vs Atletico Madrid UEFA final is not an easy feat, however a quick once round the garden to introduce everyone to what we were there for got everyone in the mood to get behind the decks and impress their pals, who were later bopping away in headphones amongst bemused onlookers.

Several Stick It On choon signs waved around in hands clutching cheap pints and eruption of cheers as someone spins “In for the Kill – La Roux” (remember that?! Summer of ’09 that could be heard playing EVERYWHERE). Spirits were high and the braver of the wallflowers busted out some serious albeit questionable moves! There were some creative DJ names and some great sets including the likes of Prince, Madonna and Dizzee Rascal to name a few but that’s the great thing about Stick It On, the flow was great, and everyone enjoyed their moment of DJ stardom!

Rob, Justin and the rest of the guys were there hands on guiding our guest DJs through the whole process. With Arsenal losing 1-0 it was tense how the rest of the night was going to go but some of the defeated supporters upon seeing silent bodies adorned with headphones and joyous faces, picked up a set and joined in the fun.

As the night drew on there was a great atmosphere and a definitive urge to hold another Stick It On and Disco Bug silent disco so keep your eyes and ears peeled for the next one, come on down and show us what you got!