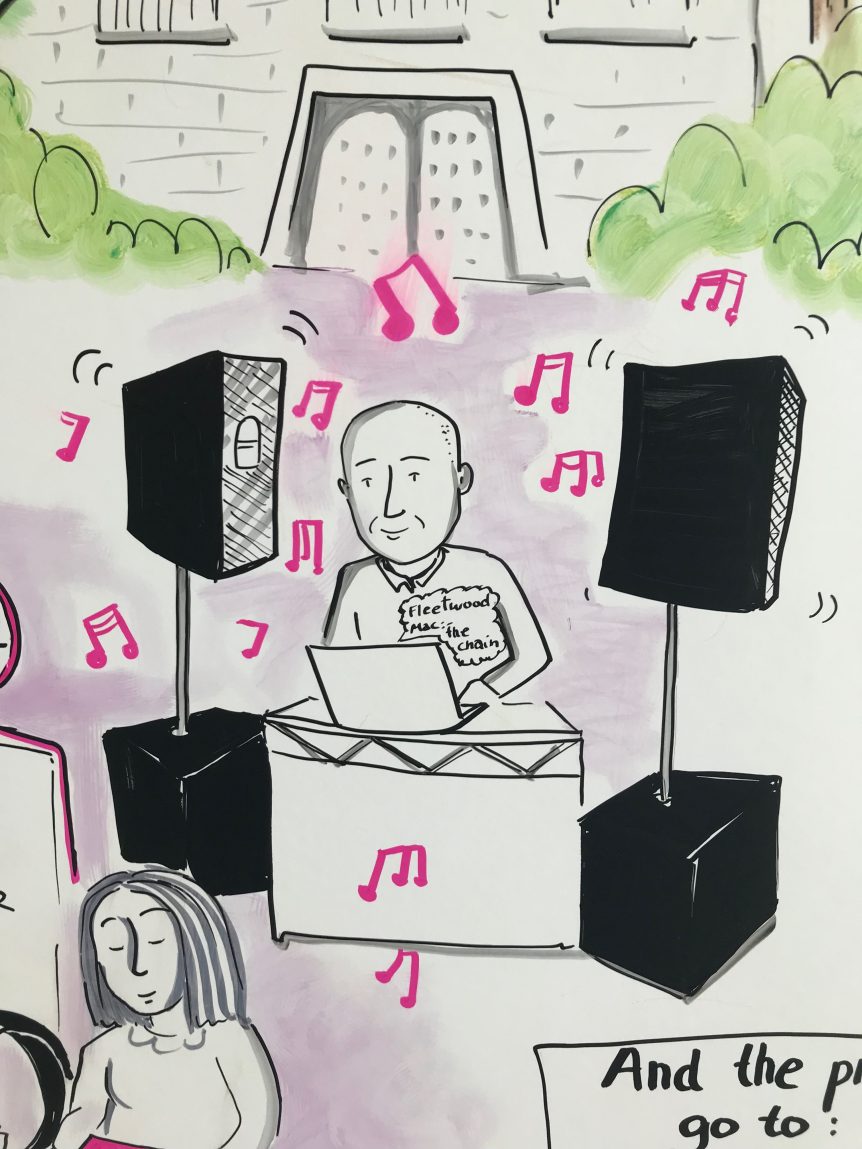 Stick It On is always keen to travel to pastures new especially if its an overseas adventure.   So when the lovely Emily from Comms Quest contacted us to enquire about how we could facilitate a group of I.T. delegates travelling to attend a conference near Barcelona, we jumped at the chance.

Comms Quest, our client and event producer for the conference are consultants who specialise in producing bespoke event solutions for meetings and conferences.  Their role was to fully understand their clients brief and ensure the key messages were communicated and more importantly delivered in a way that would be memorable, engaging and if possible fun.

Emily and David from Comms Quest lead time were unusually short. Instead of months to plan, they had merely weeks to source a suitable 5 star venue and accommodation for 80 delegates flying in from around the world to attend, produce a schedule & agenda for the two day event including set up and breakdown, hire extra suppliers/services, ensure the client would be happy with content and direction and sign it off. No mean feat in the usual lead times but extremely impressive considering this was executed in the fraction of the time. We were brought in with two briefs in mind. The first brief was to provide a live soundtrack to accompany the two team building activities booked in for both afternoons.  Day One was a Formula One team building activity, whereby teams had to build their own full-scale race car out of a plethora of materials (cardboard, plastic tubes, tape etc). In addition, they had to secure sponsorship, produce a promotional video and for those Lewis Hamilton’s within the team jump into a F1 simulator and attempt to set the fastest lap around Silverstone. Cue DJ (i.e Rob) to play adrenalin-fuelled songs to add to this excitement and exhilarating white-knuckle ride.  This was hugely enjoyable on our part, as it made us really delve the depths of our music catalogue to pick out appropriate songs to complement this activity. It has to be said that the one song snippet that got played a number of times during the afternoon was ‘The Chain by Fleetwood Mac’ (but of course!). Day Two’s theme was based on a crime thriller whereby teams had to become super sleuths and solve a murder by analyzing the clues, visit the crime scene, interview the real-life murder suspects and work out whodunnit. Similarly, to Day One our brief was to add to the tension of the activity by playing an atmospheric soundtrack that would set the tone and scene for the four-hour activity.  Again, this was a challenge that needed some thought but we do love it when the gauntlet’s thrown down and we hope that our musical choices contributed to the overall experience.

The second brief was a request to provide entertainment for the finale after-dinner party to celebrate the end of their conference.  This brief was more in-keeping with a usual request for our entertainment services.  We listened to the requirements set out by Emily, suggested the formats that we thought would work best and then set to the task to organise the event.  Now, on paper, a bunch of I.T, predominantly male delegates, who for some had only met a day before does set a few alarm bells ringing. These are not the ideal ingredients a party organiser wants to hear when you are trying to deliver a suitable finale and bring to a close a great event.  This is where Stick It On comes into its element and time and time again proves to be the perfect solution to bring a group of colleagues together into a joyous celebration of fun, laughter and spontaneous team bonding. Job done!

Our four-day excursion was a triumph, even if Rob did only get 60-minute sleep before catching his re-scheduled flight back to the UK due to a French Air Traffic Control strike.  A small price to pay for an excellent event that we were very happy to be involved in.

For our part, it was a real insight to work with David, Emily & Shelford from Comms Quest who seemed to have the cool-headed intuition of knowing exactly what their client needed at exactly the right time.  This kind of knowledge and intuitive understanding only comes with being experts in their field and it was a real pleasure to be part of it, as well as being in the company of such a nice bunch of friendly professionals.